Find out how to improve your formation’s flexibility, dynamism and attacking creativity with a formation used by today’s elite coaches to counter dated, static formations in Coaching the 4-2-3-1

Now released for forward thinking coaches! NEW BOOK –Coaching the 4-2-3-1 shows you why the formation is becoming one of the most dominant styles of play in modern soccer. Now you can discover how to train your players to utilize this highly flexible and attacking formation in Coaching the 4-2-3-1. Packed with soccer drills, diagrams on setting up your team and guidance on the formation’s philosophy and playing mindset, this book provides you with everything you need to know about playing the 4-2-3-1.

Is your team stuck playing a predictable, rigid style of soccer your opponent’s find easy to counter? Do you yearn to play an expansive attacking style of soccer, like Real Madrid, Manchester United or Brazil? The 4-2-3-1 is an innovative and highly flexible formation used by many elite teams over the last decade to devastating effect. Whether you coach players in top divisions or recreational sides, playing the 4-2-3-1 can enable you to adopt a more dynamic and creative style of soccer that can take your team to the next level.

Coaching the 4-2-3-1 is a book focused on developing both your team’s understanding of how to play this fast paced formation effectively. Soccer is a game that is constantly changing, with new formations and philosophies evolving to challenge the status quo. The 4-2-3-1 is a formation that is now used by many of the world’s elite coaches, like Jose Mourinho, Arsene Wenger and Sir Alex Ferguson,  to counter the 4-4-2 and other more static formations.

Coaching the 4-2-3-1 shows you how coaches at the top level implement the formation, both in defense and attack. Packed with more than 30 training sessions and 150 diagrams, this book will show you how to train your team to play the ball wide, how to look for overlaps, when to penetrate the forward line and all the other aspects of playing this highly flexible formation successfully.

“This book will be of great interest to coaches worldwide and has taken an interesting look at one formation in the modern game. Stevie has looked at the top managers and how they have developed this system for their own team and he has added really useful coaching practices which would allow anybody to try and implement this system with their own players. I particularly like the use of video capture of recent games to illustrate the key points and will bring the book alive for all readers.” –  Neil Mackintosh, Performance Manager – Scottish F.A.

“Discover why leading coaches have abandoned the 4-3-3 and 4-4-2 for a formation that’s more flexible, dynamic and difficult to defend against”

The 4-2-3-1 first started to appear on soccer pitches just before the Euro 2000. Under Arsene Wenger’s stewardship, Arsenal had used it to march to dominate the English Premier League and to pass rings around teams playing the more rigid 4-4-2. In Arsenal’s formation, Denis Bergkamp would drop deep behind the lone striker while the wingers would provide support higher up the pitch, with two anchoring midfielders providing another line of defense. This dynamic style of play proved to be a revelation, with many other coaches eager to adopt it for their own sides.

The 4-2-3-1 was used by the French national side to successfully win the Euro 2000 tournament, with a strong triangular midfield where there was always a spare man to pass to. Their success led to many elite coaches adopting the formation, including Jose Mourinho at Real Madrid and Sir Alex Ferguson at Manchester United. The formation also took center stage at Euro 2012, with it being used by three of the tournament’s semi-finalists: Spain, Germany and Portugal. The reason so many coaches have switched from 4-4-2 and 4-3-3 to the 4-2-3-1 is because it is far more flexible and can enable teams to quickly change formation to both confuse and counter opponents. Wingers, for example, can drop deep to create a 4-4-1-1 or move forwards to create a 4-3-3. This range of options makes it very difficult to defend against as opposition coaches never know what you’re going to do.

Coaching the 4-2-3-1 shows you how to train your team in all of the key principles of playing this creative formation. It will both enrich your coaching knowledge and train your players to use this dynamic and highly creative formation to exploit the rigid playing style of teams living in the past.

Stevie Grieve started coaching at the young age of 16 with Perth Youth Futsal in his native country of Scotland. During his tenure he was instrumental in producing players for the Elite U14, U15 and U16 teams, which all went on to win domestic and international tournaments.

Eager to further develop his coaching experience, Grieve took the bold step of establishing his own youth team, the Letham Tangerines. Again, his coaching methods successfully produced players for various Elite Youth Academy Team every season. Grieve’s reputation as an excellent technical coach grew while with the Tangerines, accumulating an impressive 14-1-1 record, ending the season as league winners and double cup winners, finishing runners up in the 3rd cup final on penalties.

Grieve would then spend six months coaching in New Jersey, USA, at three different travel soccer clubs before moving back to Scotland to coach at Dundee. He spent two seasons at Dundee as the U17 coach before moving to Raith Rovers then East Fife, where he was employed both times as a talent scout and youth coach.

Grieve then made the move abroad to Intersoccer in Switzerland, where he was the head coach of, the Swiss team FC Gland 3.  Currently Grieve is the Head of Coach of Education for Bhaichung Bhutia Football Schools, in India, where he is responsible for the development of over 60 coaches across India, designing and implementing a new coaching curriculum and helping with the development of elite players within the development structure.

A core part of Grieve’s coaching philosophy is that coaches must help players to understand why they make certain decisions while in possession and to show coaches innovative ways of maintaining and stimulating players’ interest beyond traditional drills and exercise. This approach has helped to develop over 20 players that have been selected by professional youth soccer academies.

Coaching the 4-2-3-1 opens with a guide on how elite coaches, like Vincent Del Bosque andJose Mourinho, utilize the formation. It then provides a series of chapters packed with soccer drills to coach your players in the mindset and positional awareness needed to play the dynamic and fluid 4-2-3-1 formation effectively.

The book’s first chapter focuses on developing the tactical mindset to play 4-2-3-1 effectively. This includes how to build passing combinations, how to use triangulation to create space and how to develop support play in the final attacking third.

Smooth, accurate passing is vital when playing the 4-2-3-1. This chapter provides two training sessions for small groups to improve their passing accuracy and first touch. In addition, you will find guidance on how to create movement angles, fluid passing and moving and possession games to develop a ‘keep the ball’ mentality. All the sessions in this chapter can be developed through building transitions and goal scoring scenarios.

The rise to dominance of the 4-2-3-1 was demonstrated when Real Madrid played Barcelona on their home turf at the Nou Camp stadium, April 2012. A win for either side could be decisive in determining who won the league, so the stakes for both league success and pride were high. Grieve analyses how Real Madrid’s use of the 4-2-3-1 enabled them to stop Barcelona from breaking them down and enabled Real to emerge victorious in this epic encounter.

The book now returns to focus on coaching with a chapter packed with 15 positional diagrams and 8 progressive training sessions for building cohesion between the defense as individuals and as a group. This includes how to prevent crosses, how to block passes and how to transition into attack once the ball is won back.

The diagrams are designed to be used before training sessions as they show the positions players should be in when a goal kick is taken, when the opposition full backs have the ball and where they should be generally when defending. The chapter includes diagrams for playing against a 4-4-2, 4-3-3, 4-5-1, 3-5-2 and 4-2-3-1.

Building from the back to attack

The 4-2-3-1 creates four lines of players across the field. So there are always passing options, all the way from the goalkeeper to attack. In most formations there can be a tendency to ‘dump it in the channel for the striker to chase’. In the 4-2-3-1, however, long balls are replaced with smooth accurate passing.

This chapter shows you how to build from the goalkeeper through the midfield and all the way to the front attacking line, using short passes and finding players in space. From working through the drills and exercises, your players will develop an understanding of how to find the right positions, when to move and where to make runs to receive the ball.

The final chapter features 14 sessions that focus on the important aspects of attacking when playing the 4-2-3-1. The chapter also looks at ways of building better attacking units, with dual themed sessions such as using penetration to enhance counter attacking play.

The 4-2-3-1 provides arguably more attacking options than any other formation. Grieve shows you how to harness these options and to train your players to be more dynamic and fluid around the box and to swamp opposition defenses.

The 4-2-3-1 is a highly flexible, dynamic and creative formation. The ability to evolve and shape your formation to exploit the opposition’s weaknesses, whether they play 4-4-2, 4-3-3 or 4-5-1, makes it a very powerful system of play. Coaching the 4-2-3-1 shows you how to develop the mindset and the situational awareness to use it effectively to exploit opposing more static formations.

From this book, you will gain:

The 4-2-3-1 is fast replacing the 4-4-2 and the 4-3-3 as the formation of choice for many of today’s elite coaches. However, even if you coach recreational or youth teams, the 4-2-3-1 can be a powerful and exciting formation to play at any level. Coaching the 4-2-3-1 provides you with everything you need to know about how to play the formation effectively and to create a more fluid, flexible and dynamic team.

“Stevie Grieve should be congratulated on a great book.  This book is extremely topical as the 4-2-3-1 is one of the most popular formations of the strongest teams in Europe these days.  The book does a great job explaining the formation, how to implement it and how to coach it to your players.” – Jorge Diaz-Cidoncha, PhD of Sports Science and academy coach at San Agustin and San Martin in Madrid. 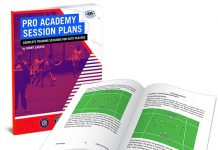 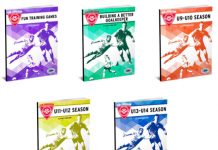 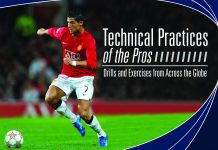 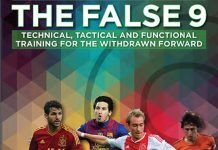 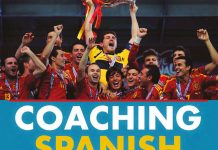